Last year was the first year we’ve grown brussel sprouts. After reading some local blogs, I learned that they are late in maturing…well, ours are super late. Is this the last harvest of 2011 or the first of 2012? 🙂 Andy went and picked them yesterday and Lucy took pictures for him. Candy, our dog, was out helping too. 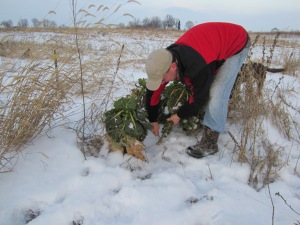 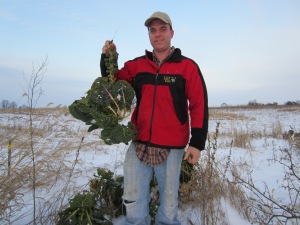 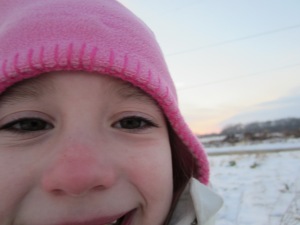 Andy let the chickens out to romp in the first snow of the season. They didn’t know what to think of this stuff. 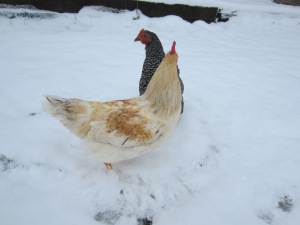 For dinner tonight, Andy cooked up the sprouts by rendering some bacon fat off of three pieces of bacon, put a little butter in, added our very tiny sprouts, browned them, and cooked them in 1/2 cup water with some chicken stock and some garlic until the water was gone. They were delicious. Sally was hesitant to try them, but after the first one she was popping them like candy.

Andy and his parents, along with Big Sister, spent most of Saturday afternoon harvesting the last of the crops from the garden. With the weather turning colder, and the frost setting at night, they wanted to get up the potatoes and the squash. 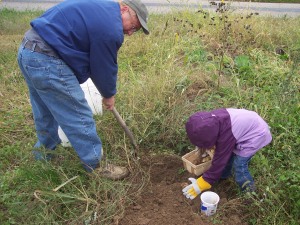 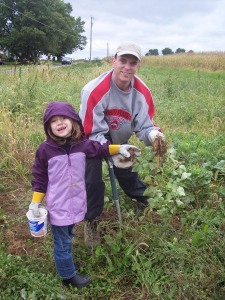 Andy’s mom with most of the bounty. A few peppers,watermelon and tomatoes remained, along with a basket of basil. I’m making freezer pesto with it. Just some olive oil, walnuts, and garlic pureed with the basil, and it then once you thaw it, add the salt and parmesan cheese. 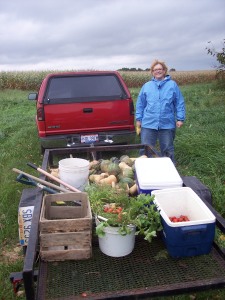 We have quite a few extra butternut and acorn squash. Feel free to email me if you would like some and I’d be happy to deliver! 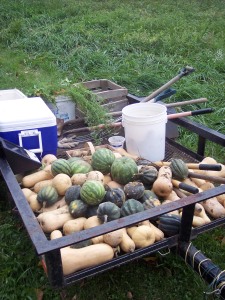